We Love You, Charlie Freeman, by Kaitlyn Greenidge 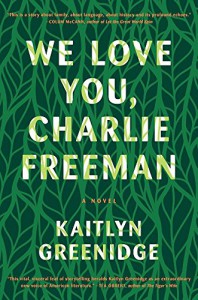 This novel quickly went from very good to fantastic. The premise and sample interested me immediately--an African American family who speaks sign language(s) moves to a scientific institute as part of a study to see if chimps (one in particular, the titular Charlie) can learn to sign.

At first it feels almost quirky; the first point of view we're given is that of Charlotte, the older of two daughters in the family. She is not happy about her parents' decision to move the family from Boston to rural New England. But as soon as they arrive at the institute, it's clear something with this situation will not be kosher. Much of the book you wait for the other shoe to drop, and as soon as additional points of view from the past and present emerge and repeat, that dread becomes specific until the reality confirms it.

Each family member relates to Charlie--or doesn't--in their own way. Charlotte is standoffish and more concerned with fitting in at the almost entirely white school she begins attending--a hallmark of the town's past (and present) segregation. She begrudgingly becomes friends with the only other black girl and hangs out with her and her mother, who both appear to be radicals. Younger sister Callie is left to her own devices and does her best to be a "big sister" to Charlie; in the meantime, food becomes her comfort. Mother Laurel has the tightest bond with Charlie--too tight, as Charlotte first discovers. Father Charles loves math and Laurel, and his devotion to her is tested by her bond with Charlie.

Alongside the family drama come flashes of the past when the institute first opened. The lens is that of a black woman who begins a disastrous relationship with one of the institute's scientists--a man who proclaims he does not believe white people are biologically better than black people but whose slowly revealed study of local black people proves otherwise. Past and present merge and culminate in one bizarre Thanksgiving dinner, followed by a telling letter written by the institute's foundress (I'm making this word up).

The novel presents one of the most nuanced contemporary portraits of race in America that I've read. Everything stems from the characters, who are deftly drawn, and the structure and lovely prose make it an engaging and subtle read. We Love You, Charlie Freeman earns my "recommend like whoa" tag, and I look forward to seeing more from this author.