My Man Jeeves, by P.G. Wodehouse 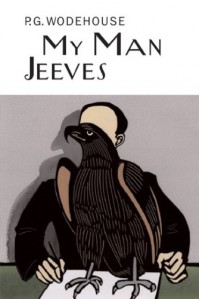 When I was a freshman in college, a professor assigned Right Ho, Jeeves as our last book of the semester for a class on 20th Century Fiction. I'd never heard of the series, though clearly it's had a big influence on depictions of butlers/valets and hapless masters (among other things) in popular culture. Reading the novel, I quickly understood why my prof had assigned it when he had; it was an easy, impossibly fun and funny book. My friend and roommate shot me a lot of looks as I chuckled or cracked up while reading it on my loft bed.

I'd always figured I'd read more Jeeves someday, and a free kindle book of My Man Jeeves proved a perfect opportunity. However, I didn't realize at first that it's a collection of short stories rather than a novel, and not all the stories feature Jeeves and his "master," Bertie Wooster. All the stories are set in America, or begin there, since Bertie is spending time abroad.

The Jeeves stories are, as usual, full of Bertie--or, I should say, Bertie's friends--getting into fixes that Jeeves inevitably gets him out of. Bertie is completely conscious of the fact that Jeeves is The Man at these things, though Bertie himself is a good chap who wants to help his friends. Bertie's voice, the language generally, is at least half the pleasure. As an example, here are a few ways he describes Jeeves's physicality:

Jeeves trickled in with the tray, like some silent stream meandering over its mossy bed...

He moves from point to point with as little uproar as a jelly fish.

Encountering these characters again, I was reminded of Sebastian from the manga and anime, Black Butler/Kuroshitsuji, clearly Jeeves's descendant in terms of skill and smoothness, if not devilry (though Ciel is more Sebastian's equal than Bertie is Jeeves's; one would never describe Ciel as "hapless.").

If one wanted, the Jeeves stories can be read as a portrait and satire of upperclass, male, British layabouts and their silly pursuits and problems, often involving allowances being cut off by stiff, older relations. It's a pleasant, pre-WWII world, and though the young men getting into scrapes are the butt of jokes, you still like everyone rather than sneer at them.

I do find that reading story after story rather than one bigger narrative made the stories feel same-y, and after the first non-Jeeves story, I skipped the others. But reading the book was still a damn fun time.